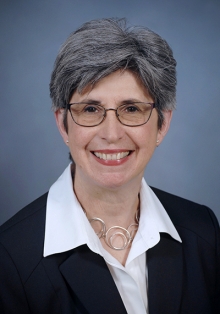 Joan Lorden serves as Provost and Vice Chancellor for Academic Affairs, a role in which she provides leadership and oversight for academic and research programs, enrollment, academic support, and information technology. Her focus has been on the expansion of the university’s portfolio in research and graduate education, student success, community engagement, and diversity and inclusion.

Lorden has led significant initiatives including the development of the College of Arts and Architecture, the Office of Undergraduate Education, the Institute for Social Capital, the Levine Scholars Program, and the School of Data Science.

Under Lorden’s direction, the interdivisional Student Success Working Group has driven a multi-pronged graduation initiative to reduce barriers to progression and graduation, implement a proactive advising system, and create a semester-long academic engagement class for incoming freshmen. As an outcome of this work, the university was honored with the APLU Award for Student Success in 2019.

Lorden has championed community engagement, supporting the development of a Civic Action Plan for the university, establishing the Bonnie Cone Professorship in Civic Engagement, and reorganizing the Office of Metropolitan Studies into the Office of Urban Research and Community Engagement. Her efforts in this area earned her the William Plater Award from the American Association of State Colleges and Universities.

In 2009 Lorden headed the development of UNC Charlotte’s Campus Plan for Diversity, Access, and Inclusion. She also appointed the Council on University Community Working Group to drive implementation of the Plan. As the principal investigator for the UNC Charlotte NSF ADVANCE Institutional Transformation grant, Lorden established programs to support the progress of women faculty in STEM.

Active in the Charlotte community, Lorden has served on a variety of civic task forces and on the Board of Directors of the Blumenthal Performing Arts Center, Discovery Place, the Echo Foundation, the Women’s Impact Fund, and the Charlotte Mecklenburg Community Foundation. In 2016, she was named Charlotte Woman of the Year.

Before moving to Charlotte, Dr. Lorden held the position of Dean-in-Residence at the NSF and was Associate Provost for Research and Dean of the Graduate School at UAB where she also directed the graduate program in neuroscience. She has held leadership roles in national organizations such as the APLU and has chaired the Board of Directors for the Council of Graduate Schools and ORAU.  Lorden received a B.A. from the City College of New York and a Ph.D. in psychology from Yale University. She is a fellow of the AAAS.