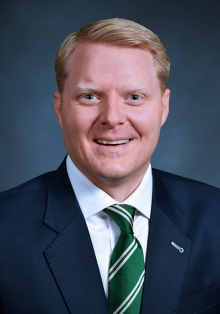 Brett Keeter serves as District Director for United States Congressman Patrick McHenry, the Ranking Member of the House Committee on Financial Services. In his official capacity, he serves as the chief district staff member, overseeing the Congressman’s offices and managing outreach, constituent casework, and community and constituent relations in the eight counties of North Carolina’s Tenth Congressional District. He also serves as primary liaison to city, county and state officials, agencies, chambers of commerce, community boards and task forces for the Congressman.

He is a 2016 recipient of the William Gaston Award, the highest recognition given by the Gaston County Commissioners for dedication and community service.

Brett resides in Gastonia with his wife, Madeline, a 2008 UNC Charlotte alum and also a past president of the UNC Charlotte Alumni Association.