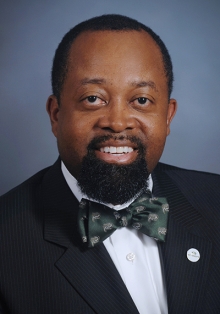 A grocery industry veteran, Young has been with Ahold Delhaize for more than 28 years. During his tenure, he has also served in several corporate leadership roles to include areas in Human Resources, Employee Assistance and Diversity.

Young represents Ahold Delhaize U.S. banners on many national and state-level business, retail and food industry trade associations. Among these, he is a former chair of the Food Marketing Institute’s government relations committee, serves on the Retail Industry Leaders Association’s government relations committee, is the past chair of the Virginia Retail Merchants Association, is a founder and former chairman of the South Carolina Retail Association, and serves as the board treasurer of the North Carolina Retail Merchants Association.

He also continues to serve on numerous other boards including the Public Affairs Council (Executive Committee), Charlotte Regional Business Alliance, the Children’s Hope Alliance, Iredell Health Systems and the Lion’s Share Credit Union. He is an active Rotarian and a Rotary Foundation, Paul Harris Fellow.

Young holds a bachelor’s degree from the University of North Carolina at Charlotte.  He has completed the Harvard Business School’s Ahold Delhaize Leadership Program, is a graduate of the Public Affairs Institute Senior Public Affairs Executive program and is a Senior Fellow of the American Leadership Forum. In addition, he obtained his professional in human resources certification, while a practitioner in human resources. He and his family currently reside in Troutman, N.C., where he serves as the Town’s Mayor.