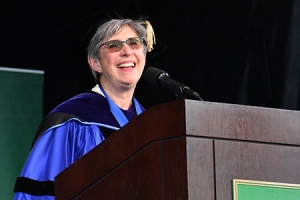 After more than 18 years of service to UNC Charlotte, Provost and Vice Chancellor for Academic Affairs Joan Lorden has shared her plans to step down at the end of the academic year. More information will be shared in the coming weeks about the forthcoming search to name her replacement, who will become only the fourth provost in University history.

Since Provost Lorden arrived in 2003, she has dedicated herself to progress and programs that serve our students, our University and our community.

The College of Arts + Architecture, the Office of Undergraduate Education, the Institute for Social Capital, the Levine Scholars Program,  the School of Data Science, the Office of Undergraduate Research and the School of Professional Studies were all developed under her guidance. Thirteen doctoral programs were launched, the number of doctoral graduates quadrupled and our research funding doubled during her time as our chief academic officer.

Provost Lorden often shares the story about speaking to SOAR students shortly after her arrival and being struck by the fact that fewer than 50% of them would graduate in six years. Under her direction, the interdivisional Student Success Working Group developed a multipronged graduation initiative to reduce barriers to progression and graduation, implement a proactive advising system and create a semester-long academic engagement class for incoming freshmen. Our four-year graduation rate is now at 49.87% , and our six-year graduation rate has soared to more than 65%. In 2019, her efforts were recognized when the University was honored with the APLU Award for Student Success.

She has also been a champion for diversity and inclusion on our campus, leading the development and implementation of UNC Charlotte’s first Plan for Campus Diversity, Access, and Inclusion. A neuroscientist and the principal investigator for the UNC Charlotte NSF ADVANCE Institutional Transformation grant, she established programs to support the progress of women faculty in STEM areas that led to the development of the ADVANCE Faculty Affairs and Diversity Office.

When Provost Lorden saw the need for the University to increase its footprint in the community, she supported the development of a Civic Action Plan and reorganized the Office of Metropolitan Studies into the Office of Urban Research and Community Engagement. She is also active personally in our community, giving of her time and leadership skills to many organizations, including the Blumenthal Performing Arts Center, Discovery Place, the Echo Foundation, the Women’s Impact Fund and the Charlotte Mecklenburg Community Foundation.  These are only some of the reasons she was named the Charlotte Woman of the Year in 2016.

Provost Lorden’s impact on our University cannot be overstated or adequately captured. She is the longest-serving provost in the UNC System, and she holds the respect and admiration of her colleagues in North Carolina and throughout the country.

We will continue to celebrate Provost Lorden’s accomplishments in the year ahead. Please join me in thanking her for the amazing work she has done and her transformational leadership at UNC Charlotte.